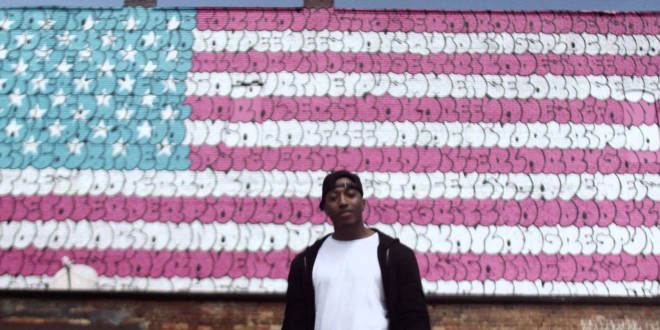 Last Thursday, Lecrae released a music video for “Welcome to America,” the second track on his chart-topping album Anomaly, a song he performed earlier this year on Fallon (using sound clips from Selma to accentuate that performance). It is a well-produced, multi-faceted, and powerful video accompanying a poignant and unflinching song. “Welcome to America” comes in what has become a tradition of hip-hop songs decrying the various problems facing this country.

The idea that I’m kicking around here is how we can be affected by songs like “Welcome to America” yet still, with readiness, say “I’m proud to be an American,” and “This is the greatest country on Earth.” Because you have good reason to be proud of America, and it is, in many ways, the greatest country on Earth. But, at the same time, I don’t think anyone, unless they are insane or ignorant, would dispute the images put forth in Lecrae’s video and how accurately they represent problems facing America, particularly (in this video) the problems faced by marginalized youths, military veterans, and immigrants. How is it that we can, so easily, accept America as a fantastically wonderful country of opportunity and freedom but also a repressive institution of discrimination, crime, and poverty?

There are some who might say that they are not proud of America, or go so far as to say that the nation is one big evil thing with no hope of life, liberty, and the pursuit of happiness. Sometimes this comes from a fairly limited perspective, sometimes not, but I think most of us would agree that there are, truly, some pretty amazing things about this country. This is why I think songs like “Welcome to America” are so affecting: we have in our minds a vision of what America should be for everyone, but we know that not everyone is living in that America. It’s like Lecrae is saying that the reason these trials are so awful is the fact that there is a better America out there. These things shouldn’t be happening because plenty of us exist without them.

It would seem that there are two Americas. There is the one where every child has a chance to grow up healthy and educated, the members of our proud military tradition are lauded and cared for, and immigrants are welcomed to the family with the opportunity to find refuge and to lend great contributions to the nation. Then there is the other America, in which children are treated like insignificant animals, veterans are left to poverty and subject to scorn, and immigrants are discriminated against or outright rejected from ever arriving.

Which of these Americas is real? Is one reality and the other a nostalgic memory of what we perceive as the good old days? Is one filtered through red white and blue sunglasses and the other subject to stark reality? Are they propaganda from politicians? Or can they both, truthfully, exist at the same time?

Consider these things as you consider your nation and your patriotism. It is well and good to be a proud American; there are many things of which to be proud. The United States is, in many respects, a great nation. But ask yourself why. Why are you proud to be an American? And what is America anyway? Because the nation that you love for the peace and prosperity it has brought you is the very same one that has brought horrible trials and tribulations to millions of others. Just because that’s not what someone thinks of when they say “Merica!” does not mean it is no less a part of “America.”

I tend to think, when I watch videos like “Welcome to America,” that this is just not the way it’s supposed to be. America is supposed to be so much more.

2 thoughts on “Welcome to America”